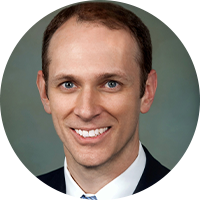 Austan Goolsbee is the Robert P. Gwinn professor of Economics at the University of Chicago’s Booth School of Business and one of the world’s leading experts on business, government and the economy. He is an in-demand advisor, having served as chairman of President Barack Obama’s Council of Economic Advisers; as a member of the cabinet; as chief economist for the President’s Economic Recovery Advisory Board, chaired by Paul Volcker; and as a member of the Economic Advisory Panel to the Federal Reserve Bank of New York.

Goolsbee is a former Fulbright Scholar and Alfred P. Sloan Fellow and sits on the board of the Lumina Foundation. In 2009, he was voted “D.C.’s Funniest Celebrity.” He earned his bachelor’s and master’s degrees in Economics from Yale University and his Ph.D. in Economics from the Massachusetts Institute of Technology.

The keynote speaker presentation is proudly sponsored by:

Join us virtually to hear from a premier speaker lineup and share your concerns with elected officials.

Read bios and details about the event’s keynote, featured and invited Congressional speakers.